Anchored by Giant Eagle, Dick’s Sporting Goods, Burlington, Marc’s, T.J.Maxx, Ross Dress for Less, Ollie’s Bargain Outlet, Ashley HomeStore, and BJ’s Wholesale Club, the bookstore chain has officially opened for business at The Plaza at Chapel Hill in Cuyahoga Falls. This center is located within one of the most densely populated suburban trade areas in northeast Ohio, with over 200,000 people residing within 5 miles.

Cap rates across nearly all property segments compressed significantly since late 2020. Pent-up demand, lack of supply, eagerness to return to business, and the close of a contentious presidential election all led to the frenzy in buying over the past nearly 24 months. Now that the Federal Reserve has decided to tackle inflation by aggressively increasing the Federal Funds Rate and as interest rates for commercial mortgages have risen between 175-250+ basis points in a matter of months, shouldn’t those compressed cap rates follow? Not necessarily. Cap rates for STNL retail have shown strength during the past few months as interest rates have rapidly increased. The reason? Strong demand for the product type amongst a constantly growing number of individual investors, private equity funds, and others have kept the market in balance. Many STNL transactions are being closed with all-cash or lowly leveraged positions, neither of which are greatly affected by fluctuations in interest rates. That being said, we have begun to see highly leveraged investors require lower pricing to offset higher interest rates. As this continues and more deals need to be re-priced to accommodate these high leverage positions, we would expect cap rates to eventually creep upwards to accommodate the needs of the market.

If you have questions about buying or selling on a national basis, you can reach out to Kyle Hartung, Vice President and Director of Investment Sales at Goodman Real Estate Services Group, LLC. 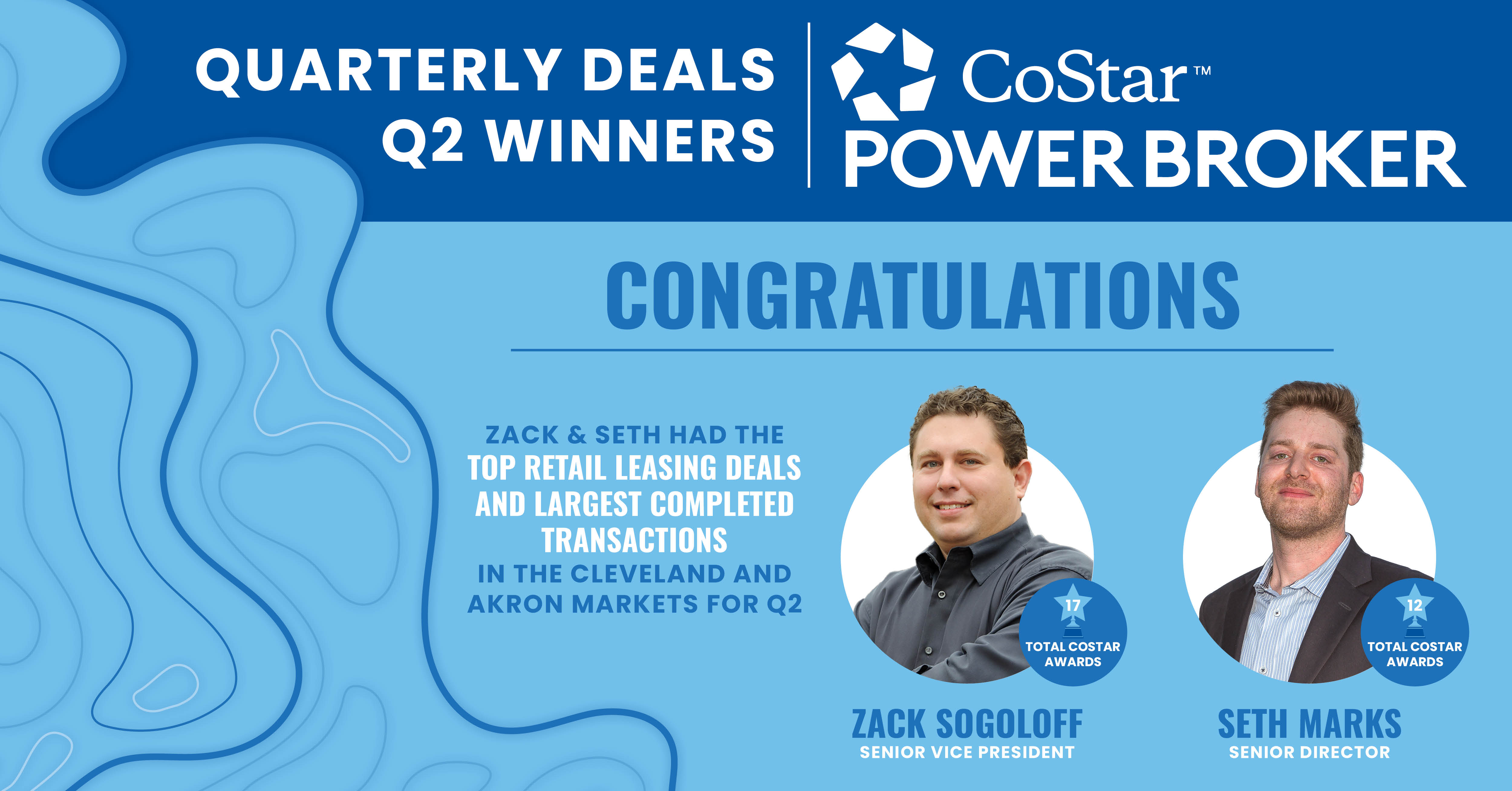 Zack Sogoloff, Senior Vice President at Goodman Real Estate Services Group LLC; and Seth Marks, Senior Director at Goodman Real Estate Services Group LLC were recipients of two CoStar Power Broker Quarterly Deals Awards in 2022's second quarter. These awards were received in recognition of their deal with Boot Barn for 12,000 SF in Akron, Ohio, and their deal with HomeGoods for 28,095 SF in Warrensville Heights, Ohio. Zack and Seth represented the landlord in these transactions. These were the top retail leasing deals and largest completed transactions in the Cleveland and Akron markets for this year's second quarter.

Before the pandemic, the fitness industry was greatly expanding its presence in the retail scene by occupying space in malls and shopping centers. According to CoStar Group, the amount of square footage leased within malls by fitness concepts and gyms had increased by 70% since 2013, with Planet Fitness leading the way in leasing more vacant mall and empty big-box store space than any other company (Fitt INSIDER). Today, big gyms have adapted to the decline in memberships following COVID-19 by offering livestream workouts, as many prefer to continue digital workouts. While memberships are beginning to rise again, the future of fitness will likely remain a balance between virtual and in-person options.

Further, smaller concepts have become an increasingly popular option amongst gym-goers. After learning to exercise in an at-home setting, many are hesitant to return to an overwhelming, larger gym setting. Although these smaller-sized fitness options pose a higher price point than larger-scale centers, some consumers have shifted from the big-gym scene to a more personalized experience. Creative forms of fitness, such as Orangetheory Fitness, which offers one hour HIIT focused workout classes; Club Pilates, which offers a more low-impact mind and body exercise; TITLE Boxing Club, which provides users with an explosive full-body boxing experience; and CycleBar, one of the many growing cycling concepts that motivates each class with exciting music and a self-empowering group mentality, have taken the fitness scene by storm. These “boutique studios” do not require big-box space and seem to be popping up at every turn. There is a newfound emphasis on mental health and achieving a balance between healthy exercise habits together with maintaining overall well-being. Many are prioritizing emotional and mental fitness as well as traditional physical exercise. These smaller concepts are at the forefront of this thought process.

For its new retail concept, pOpshelf, Dollar General has pledged to open approximately 1,000 stores by the end of the 2025 fiscal year (pOpshelf). The brand offers affordable and trendy merchandising, and their mission is to create an exciting environment for shoppers to enjoy the fun and unique things in life. The company sells a wide range of products, such as home décor, party goods, beauty supplies, toys, entertainment items, and much more. pOpshelf emphasizes the experience of shopping and encourages the customer to explore their products in an almost treasure hunt-like fashion, with their merchandise on a constant rotation to keep consumers excited to come back for more!

As of July 2022, the company has opened 75 pOpshelf locations in the U.S. across seven states, including Georgia, North Carolina, Tennessee, Alabama, Texas, South Carolina, and Florida (ScrapeHero). The retail concept occupies spaces of roughly 9,000 SF and targets younger and wealthier women as opposed to Dollar General’s slightly older and more rural target market (RetailWire). According to Dollar General, “over 90% of the merchandise sold by pOpshelf costs $5 or less” (CNCB). Dollar General is well on its way to achieving their expansion goal since its announcement in December 2021, and they are continuing plans to reach new markets across the country.